We encourage our friends and partners to support this important organization, especially in these difficult times. 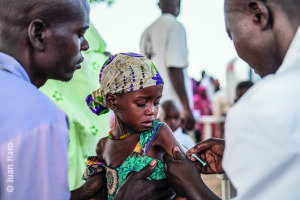 Achta Brahim, 4, receives her first ever vaccine against measles in Ryad II village, in Ablelaye, Am Timan,, as part of the MSF response to the measles outbreak declared in Chad in May 2018 and still ongoing. 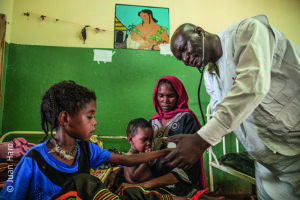 Ollivier Allarasemm, MSF doctor, arrived on March 26 to Am Timan hospital as part of the CERU response to the measles outbreak.
Upon his arrival, cases decreased in comparison to the months of January and February. Since the arrival Ollivier is in charge of supervising the evolution of the two little ones, Fanne and Zara, and of confirming that the treatment they are receiving is working..
‘I am concerned about the reluctance of families to go to health centres to receive treatment for measles. In the case of Mariuda, they did not arrive on time and the children suffer now from measles with complications. Sometimes, people in the communities believe that is destiny, that is God’s will. We know many cases of parents who do not wash their children affected by measles because they think they can die. Sensitization is key’
Zara, 2, arrived on April 3 at the hospital weighing 9 kilos and with high fever. She had a rash, cough, diarrhea, and was vomiting. Her case wasn´t treated on time so it turns out to suffer complications from measles that put her live at risk. She was treated immediately at the Am Timan Hospital by MSF staff. Today she is stable with lower fever, waiting to be discharged as soon as she fully recovers.
Mariuda Ousmane, 40, arrived on April 3 at the Am Timan Hospital with their two children, Fanne Nazal, 7, and Zara Nazal, 2.
They arrived by motorcycle from a nomads settlement in Dilemma, 5 km from the city of Am Timan. The two little children are victims of the measles outbreak that affects this region in Southeast Chad.
These days, Mariuda takes care of her children in the isolation room for measles cases of the hospital, andonly with her mother’s help. Mariuda didn’t have an easy life. She lost one of her children due to health complications. Mariuda is now 9 months pregnant of her fourth child. Her husband is a ‘Marabú’ from N’Djamena who only comes to see her once or twice a year. Despite being aware of the state of the child

As software industry and ecosystem veterans, with experiences from working at/with the largest enterprise software platform companies and innovative global B2B startups, we are qualified to help your company to unlock its full potential, accelerate growth, and create value for all stakeholders.

Learn more about our services »

We are a strategy and growth consulting and implementation boutique, that supports innovative startups and software companies to grow faster thru strategic changes, investments, partnerships.

Learn more about us »